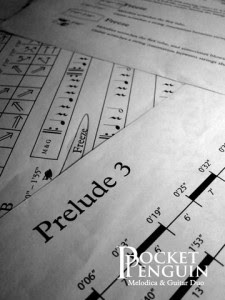 Pocket Penguin has been expanding their repertoire mainly by adapting various pieces with a view to exploring different possibilities of interpretation. Our repertoire is not all mentioned on the list, is constantly increasing and frequently being updated.

Recently we are taking a different approach to the sound world of melodica & guitar. What we are experimenting with is to find new sound material or different ways of producing sound on each instrument and then assembling them into a pattern or a time framework.

These fruits from our explorations are output as a series of "Preludes"—so named because we think they have some similarities to general aspect of conventional prelude, i.e. rather short duration, limited material and pattern, improvisatory—as some parts are left for the performers' judgement.

Our Prelude may include some "pre-removed" material, structure, and ambiguity from music. So we seem going back "before music", that is a place where the sound may not yet be called music, as in the Latin "Prae-ludere" which etymologically meant "before playing".