A Concert at Union Chapel (The Daylight Music)

Pocket Penguin finished a performance on 2nd of March in the Daylight Music, a musical event regularly held at Union Chapel. 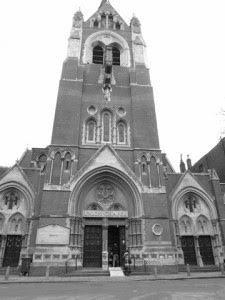 We would like to say thank you to all the people who were there listening to our performance warmly and carefully, and those who gave us good feedback, that will certainly encourage us to go to next step of music making. And also we would like to give special thanks to Ben who gave us the opportunity to play in such a nice venue, and stuffs who supported our performance.

We played 6 pieces. Prelude from Cello Suite III is a piece we recorded in the first album "A Bird Flying over Mountains" and played several times before. And all the rest of the programme was the first time to play in public.

The title “Walking through a forest” just came from an impression of the piece, like walking in a winding road in a forest and sometimes stopping suddenly and looking around.

Prelude I, III and IV are from a series of experimental pieces by Pocket Penguin, exploring sound material and combination of our instrument. We will describe more details of the series 'Prelude' later in our blog. You can have a glimpse of our rehearsal on Facebook, and also listen to Prelude I on Soundcloud.

“Çok Güzeller” was a piece Ryusuke has just made last week in a demand of rhythmic and “happy” repertoire of Pocket Penguin. The title is Turkish, meaning “very beautiful” in third person plural form. We wondered if someone noticed the Bach motif, a succession of notes, Bb A C B natural, used at somewhere in the piece. Our programme of this time actually began and ended with "Bach".
at March 03, 2013