The second album of Pocket Penguin "Prelude" finally became available to order from our store online. This time, we included only new works written particularly for melodica and guitar, whilst the first album "a bird flying over mountains" consists of arrangement works originally for different instruments. 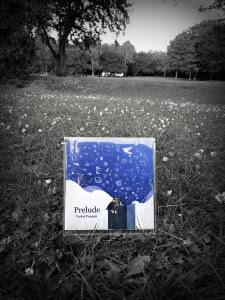 The preludes are series of experimental pieces that we described in the article before. "Fragments of Dreams" is a selection of pieces which Ryusuke writes every night. And the last piece, Hoshikage (meaning shadow of starlight in English), is a trio piece for violin, melodica & guitar. Hoshikage, titled in Japanese, was originally composed to perform at a charity concert for the great earthquake in Japan in 2011—the event eventually became the opportunity to start Pocket Penguin. Unfortunately this piece was not included in the programme of the concert and there has been no chance to perform until now. But finally it came out to be audible as a recording.

Why melodica & guitar - why not violin, piano or other instruments? It is a question we have been asked so many times by people since we have established Pocket Penguin. An answer is here in the album, it is simply because other instruments would not make it possible, if it is not the question asking about our original impetus to choose this combination.

We have been working with these particular instruments, searching possibilities of using them, sometimes along with, sometimes against a conventional way of producing sound. And we have eventually discovered plentiful ways of producing sounds specifically belonged to the instruments. The album consists of full of moments which were producible only by melodica and guitar, and were not replaceable by another instruments.

Both guitar and melodica is very commonly played all over the world, and this combination also may look not very unique. However we believe that the possibility of this combination has not yet been exhausted at all, and we are very much convinced that there still remains vast areas of sound making which is has not been explored enough. This album is just at near the entrance to the frontier of sound world.

We have done only what we wanted to do, and what we felt "should" do. We don't expect a big commercial success to this album, but only hope this album will reach to a person in somewhere in the world, to share a joy to meet a new sound and a dream.

The lovely art work was designed by Kaori Onishi, an illustrator and animator in London (Her recent works include "minna no uta", a famous music programme of NHK, Japan's national public broadcasting organisation). We gave her some fundamental ideas on composing sound and music, which penetrates the works of the album. She interpreted and reflected them on the artwork beautifully with her brilliant technique of drawing, in an unpredictable way to us.

The second album "prelude" is available with hard copy, we don't make it downloadable with audio files this time as the first one is.

P.S. please find that new goods of Pocket Penguin, stickers & postcards are also available to buy at our store now.
at July 21, 2013 No comments:

We performed at two events on 14th Jul, 2013. It was very busy and HOT day–London is currently in a heatwave, and apparently this weather is set to last throughout July–, but we enjoyed them very much.