From the end of 2014 to the beginning of 2015, Ryusuke was back in his hometown in Japan after two years. It was snowing heavily there. After finishing concerts in Aichi, he spent his time for making melodica’s cover of wood with his fathers help. We have been very interested in using different material, especially wood, for melodica, Ryusuke once tried to make a wooden cover in London in 2013, however we did not have enough tools and good material either, so he eventually stopped just before completing. Wood is probably the one of the most popular and general material for making musical instrument, even in when we can choose from most diverse materials. Currently (Jan 2015) most of the melodica on the market are made of ABS, but on the other hand, the wood pattern design on Hammond 44 or PRO-32 V2 by Suzuki seems to represent an admiration for the material by the maker or performers. 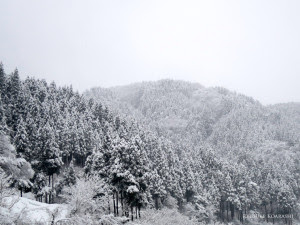 There were several wooden boards propped against the wall of his father’s studio, the wood we chose for this time was probably around 100 years old counting its dense grain, perhaps a kind of Hinoki—a Japanese (or taiwanese?) cypress, but it does not have Hinoki’s characteristic fragrance very much. According to Ryusuke’s father, the material has been there in the studio when the town was flooded in 2004, so at least for ten years. 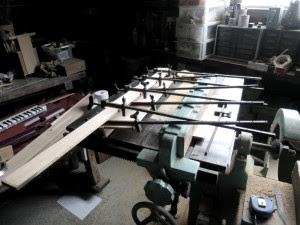 It is very hard to make melodica from the scratch, so this time we just made the outside cover with ready-made one(inside). The working process eventually took 5-6 days. The first thing the sound tells us is that the reed decisively determines the timbral tendency that is not changed fundamentally by the outside cover. The second thing is that the wood may not always produce good, or desirable tone, even plastics might do better (here we are not saying the result of wood was bad). The tone heavily depends on what wood it is (obviously wooden material is hugely diverse), and its structure. Mere 1mm can make considerable difference on harmonic structure. Perhaps Using wood as a single material is not enough, but perhaps mixing different material is needed to reduce unnecessary harmonics. Such thing is presumably obvious for maker/player of concertina—an free reed instrument belonging in same family with Melodica, they have been making very much elaboration to acquire their desirable sound.

Throughout making, there remains many subjects on structure and material, but the timbre came to close to what we want, so we are satisfied as the first work. Regarding its timbre, we heard several people resembles it an organ (Reed organs were used for music class in primary school in Japan). 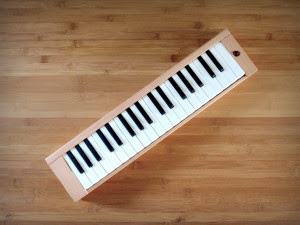 The details about its timbre will be in later article.

El Cóndor Pasa is a famous Peruvian song composed by Daniel Alomía Robles. The transient modulation in the last section is an idea from Raúl Mercado’s version.

We have not mentioned to anyone, but actually Ayumi suffered from an idiopathic numbness in her left hand for a long period in 2014. She recovered only recently. As we would have some performances around the end of the year, Ryusuke had to make repertoires which do not sacrifice her hand in the trouble.
The repertoire of Pocket Penguin—Duo Penguinistan has been made for two hands basically. Playing various kinds of music in Duo—a minimum format of ensemble—often requires many notes/voices that are not capable by just one hand. There is a way to hold the instrument vertically as many melodica players do for satisfying audience’s eyes by showing their hands and keys, but we don’t. In most cases we prefer to hold it horizontally such as a piano player, since it enables much more flexibility for both hands and it can respond to technical demands in our repertoire.
Melodica is a polyphonic instrument that is able to produce multi voices simultaneously. However, the independency of voices is limited. For instance, when one plays two notes, Each volume of them is different—the lower note is always louder. Releasing one key while playing two notes, the volume of another note gets suddenly louder. And of course using more keys needs more breathing. These characteristics of melodica has been often annoying us on playing and especially arranging, requiring to find notes which does not impair the balance of volume, and to ensure the space to breathe.
By the way, last year we started melodica ensemble club in London. There we can play multi parts together easily which I had to do alone. Thus we can overcome the technical limitation, get more options on arranging. Moreover the separation of each voice part is desirably clearer.
Throughout the experience in ensemble, and the trouble of hand, we are getting to see the limitation and character of solo playing or playing in duo. If music has a space for many people to join in, it is better to do so, one does not need to do everything alone.
at January 22, 2015 No comments:

WE ARE! by Melodica Trio

We mentioned in an article before, we are running a melodica ensemble in London. One year has just passed since we started. The piece uploaded this time, ‘We Are’ is one of the ensemble’s repertoires, an opening song from a Japanese animation ‘One Piece’ (by the way, we are not playing only animation songs, in case you think so). One of the members suggested to include the piece in the repertoire and Ryusuke rearranged for three parts. For melodica that has only a limited register and strong harmonics—often crush in harmony, three may be an appropriate number of parts, that gets a richness in sound and can still keep a clarity in texture.