After the charity concert at East Finchley Methodist Church

Most of the audiences were new to hear music of Pocket Penguin, but we got good feedback from them. And we really appreciate people who generously donated to a music school in Palestine, Al Kamandjâti, that was the main purpose of this concert. 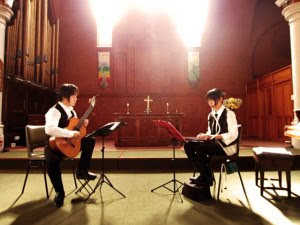 We have been playing Bach’s prelude of Cello Suite III on its own, but this time we included the entire pieces of the suite (Prelude, Almande, Courante, Sarabande, Bourre and Gigue) into the programme, that was our first attempt. Upon request of the church, we played one piano and guitar piece, “Variations on the theme SHABONDAMA”. That was the piece we played for the Great East Japan Earthquake in two years ago. At the same concert for the earthquake, we played Dowland Returns(for narration and guitar) composed by Yuji Takahashi, which he used musical fragments and words by/about John Dowland. This time we played two pieces from Dowland’s own works by newly arranging for melodica and guitar. Bulgarian Folk Songs were perhaps the highlight of the programme of this time. Ryusuke has had a special interest to Bulgarian music for over 15 years—constantly attending concerts and collecting the materials (recordings & books), he had even written an essay about it when he studied at the Guildhall school. We have often played Kopanitsa, a piece of Bulgarian dance, to our programme. We gained new repertoire by “re”arranging some well known arrangements of folk songs by Philip Koutev and Ivan Kavaldzhiev for Bulgarian female choir.
at April 17, 2013