Fragments from the Film "Nuovo Cinema Paradiso" is an arrangement of pieces from the famous Italian film "new cinema paradise" in English. Ryusuke first arranged for solo guitar many years ago, and this time rearranged it for melodica and guitar. All the film music might be strongly attributed to a particular situation in the film, but such film music can often be enjoyed separately, giving alternative meaning and context outside the film. The pieces in the arrangement was not just ordered with following the story of the film, but was re-edited to give a different meaning as a whole. (originally it was made it for a wedding party of Ryusuke's friend). Romanian Christmas Carol is originally a piano piece by Bartok, chosen and "edited" from Christmas songs in Romania.Those songs are sung during Christmas time, but according to Bartok, many of those have the origin in ancient religion before the Christianity raised. Foreign Hill was composed in many years ago, and was even forgotten until now "rediscovering". Now it is renewed for melodica and guitar, and will be performed for next concert again. 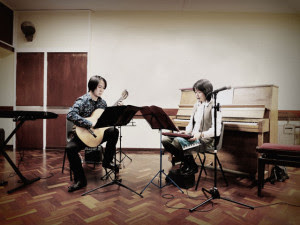 The concept of Kitchen Party is to enjoy listening music with eating and drinking. So everyone brings his/her own food and drink to share with each other. We have enjoyed various food from many different countries, but this time, surprisingly we encountered our favourite food, SUSHI!! Many thanks to N-san who brought it! and hope to see "them" again! 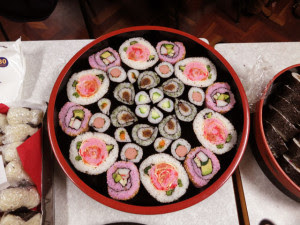